I tell people about Jesus. If there’s one thing that I believe I’m called to do, that’s it.

Sure, I could bag groceries or organize a spreadsheet or be a taxi driver, but what really moves me is seeing people transformed by the Truth of God’s word and the life of this crazy man named, Jesus. I believe in this man so much that I’ve dedicated my life, love, and language to seeing others know him too.

When I’m invited to talk about Jesus, it’s nothing short of a MASSIVE honor that I take very seriously. So please understand that this story has less to do with me failing than it does me seeing success in a new way. Success isn’t what we do, it’s who we are when we do what we are called to do.

This past Saturday while standing on stage in a room full of thousands of people, I preached the gospel unabashedly. I was prepared; I had prayed; I practiced. It was time to equip and unleash the Truth I believe God imparted to me. That was until something happened.

When I stood the stage, I felt a tickle in the back of my throat. Nothing big, but a small annoyance. Fifteen minutes into the message, the tickle was so annoying I had to stop teaching to drink some water. Which then led into coughing. Which then led into me taking off my microphone, turning it off, coughing like a maniac, turning my microphone back on, and coughing again.

I composed myself, took another sip of water, and proceeded to speak. BUT NOTHING CAME OUT. I had coughed so hard my vocal chords decided to revolt. My internal voice said to me, “PULL IT TOGETHER, SISTER! THIS ISN’T OVER.”

When I spoke, it was raspy and hoarse, but audible. I found my voice–distressed and raw–and pushed into high gear like it was my business. I knew exactly what was happening and I wasn’t going to give the enemy room to shut my mouth or steal my voice. I began preach with such ferocity and tenacity, ain’t nothing could’ve stopped me!

The message ended and we erupted in raucous worship, but as I walked off stage, I felt a huge wave of depression sweep over me. I felt like a massive failure. While backstage, I found a quiet space and called Matt to tell him how embarrassed I was. He assured me I was making a bigger deal than it was and to hold my head up. [Husband talk for PULL IT TOGETHER, SISTER!]

I walked into the guest room and saw my dear friend Bob Goff talking to a group of people. If you’ve never met Bob, he’s a combination of Jesus, Santa Claus, Willy Wonka, and Walt Disney. Basically, he’s MAGIC! He has this insane ability to leak Jesus, love fiercely, and speak to your heart. He wasn’t at the conference when I spoke and I was so relieved that he didn’t have to witness my hiccup.

As we were talking, he rummaged around in his backpack and pulled out some medals. Only Bob Goff would have wartime medals in his backpack, I thought to myself. He’s the type of guy who would. As a lawyer, Consulate to Uganda, business man, New York Times bestselling author, and magic man, I assumed he earned medals for being awesome.

But before I could ask a question, Bob got on his knees in a room full of people, pinned a medal on my chest and stared straight at my face. With the biggest smile I’ve ever seen, he whispered, “Bianca, I want to give you a medal because I see the way you love people and I want to let you know that I’m proud of you! You are doing so much and you need to know that you are seen and known. I choose you, Bianca. You’re my friend.” 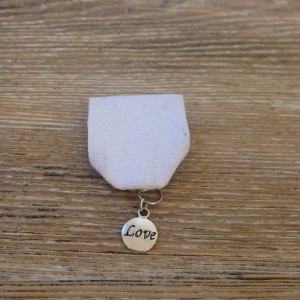 Listen friends, you might think I’m crazy, but I totally had a moment. My eyes filled with tears as he spoke these words over me. Yes, the words were coming out of Bob’s mouth, but what I felt and heard were words from Jesus.

Bob wrapped me in his arms and gave me a hug. I thanked him, but nothing could express what was in my heart. One of his famous quotes states, “I used to be afraid of failing at something that really mattered to me, but now I’m more afraid of succeeding at things that don’t matter.”

In that moment I realized that I was afraid of failing at something I loved to do, but the one thing that mattered most was that I love people well. And if we can do that, then we succeed. That reminder wasn’t just for me. Bob’s words, dare I say God’s words, are for us every single day. Whether we sit at a desk, fly a plane, rock a baby, or stand on a stage, God chooses us, knows us, sees us, is proud of us, and wants us to love extravagantly.

Love does.* It really does.

*If you haven’t read Bob’s book, I highly recommend you check it out. It’ll wreck your world.