lay down your influence, identity, and income…

{To read part one of the tips from Moses’ life on calling and purpose, check out yesterday’s post HERE}

My heart is to see a movement of God’s people living extraordinary lives. I’m tired of seeing children of the Living God walking around half dead.

Instead of chasing the purpose created for them, they are afraid of what pursuing God means.

I get it. We have lots of fears. When God asks us to pick up our cross and follow him, we may become reluctant and want to run our own lives. Moses was just like that. But God interrupted his comfortable life. Think about it. Mo was hitting 80 years old, he was ready to retire. You know, settle down with the grandkids and rock on his front porch.

But there’s a bush that is burning and Moses’ life is about to get flipped upside down.
Moses answered, “What if they do not believe me or listen to me and say, ‘The Lord did not appear to you’?” Then the Lord said to him, “What is that in your hand?” “A staff,” he replied. The Lord said, “Throw it on the ground.” Moses threw it on the ground and it became a snake, and he ran from it.” [Ex. 4:1-3]

In Exodus chapter 3 [read it for extra credit], Moses had many doubts and many fears. He came up with tons of excuses. But God asked Moses what was in his hand. 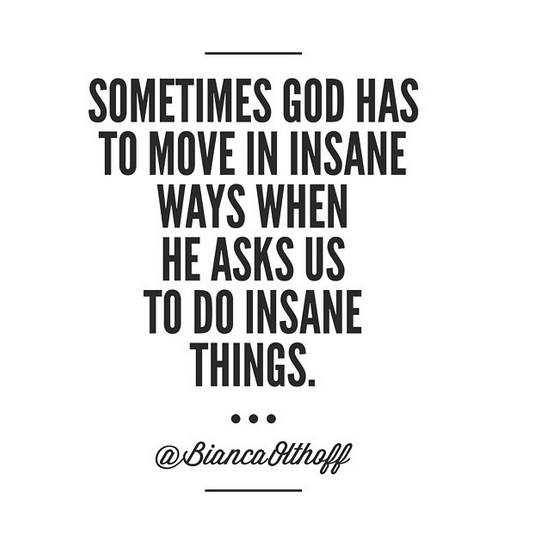 We know Moses has a shepherd’s staff in his hand, a dead thing. But then he laid it down and it became a snake. A dead thing became a living thing, and a dangerous thing at that. So dangerous in fact that Moses actually runs from it! God says to pick it again and it becomes a dead thing again.

Just like God told Moses, I believe God is telling people today to lay it down. Will you not lay down your identity? Many of us are defined by our job, our education, our financial status, or marital status. But Galatians 2:19 reminds us that, “I have been crucified with Christ and I no longer live, but Christ lives in me.” Yes, it’s no longer about me, but rather Christ who lives in me. God is saying, Let me be the one to give you identity. Find your identity in me.

Before we find our passion and calling, we must be willing to lay down our influence and recognition.

The recognition of man pales in comparison to what God has called us to. God is asking if you’re willing to lay down our dead things so he can make them come to life. Many people are living lives that are dead; it feels comfortable and safe and controllable.

But when God gives us a vision for our life like He did with Moses, we’re able to see the power God has for us, the purpose he promises us, and the plan he wants for us. It might scare us. Some might even want to run away from because it’s terrifying and they won’t know how to handle the amazing things God has for them.

Even in his wildest imaginations as a Prince of Egypt, I don’t think he knew what he was going to do through the power of God.

Sadly, I believe that Christianity has lost sight of that. Today we define a mature Christian as someone who goes to church, knows some scripture, doesn’t drink, doesn’t smoke, doesn’t curse, and volunteers at a non-profit, but goes along pursuing their own dream trying to find fulfillment. They go along baptizing their dream and Christianizing it.

But God has HUGE dreams for us! He’s whispering in the wind and speaking through the fire and shouting in silence the extraordinary dream He is birthing in you. His dream for you is far greater than the dream you have for yourself. It’s not your identity or income or influence that will make this happen. Like Zechariah 4:6 says, “’It’s not by might nor by power, but by my Spirit,’ says the Lord.”

God isn’t waiting until you have more resources or a husband or a job so he can use you. He can use you now.

Stop asking when you are going to get your gifts or talents or calling and see what’s in your hand.